After turbulent months of debate over the future of schooling in South Africa, one thing is clear: The current education system does not cater to the needs of our local and global economy. In the time of innovation, our teachers are not equipped to deal with this change and soon enough, traditional employment opportunities will no longer exist. This is a frightening forecast for a country already rife with unemployment, with young South African’s making up 65% of the unemployed population.

That’s where FutureProof comes in. In a country flooded with NGO’s that promise a ‘miracle cure’ to the youth unemployment crisis, FutureProof’s solution is simple. Teach them the real-world, practical entrepreneurship skills needed to not only run a business but to navigate through life, by preparing children for an uncertain future. 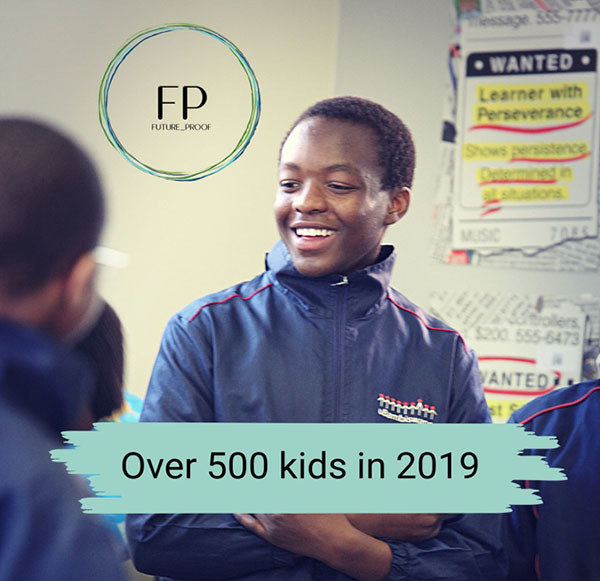 Co-founded in 2015 by entrepreneurial educationalist Lisa Illingworth, the FNB-backed program has instilled entrepreneurial skills in over 600 learners across South Africa through partnering with schools like St Andrews, St. Peters, Vuleka School and Parkfields Primary. This is an impressive feat, considering the resistance that Lisa and her team has faced from traditional schools over the possibility of integrating entrepreneurial modules into the mainstream curriculum. Nevertheless, FutureProof has been able to introduce over 600 kids to entrepreneurial thinking through its school programs, weekend mentorship and wildly popular ‘Bake-a-Business’ workshops.

The learners who’ve benefited from FutureProof’s courses hail from some of the most elite schools in the country to the most economically disadvantaged, and it is the latter category that Lisa hopes to spend more time on in the near-future. Although FutureProof practices what they preach as a proudly “for purpose, for profit” business, they seek to empower disadvantaged South African’s through promoting entrepreneurship as a mechanism for intervening in the poverty cycle that young people are caught up in. “Many learners from disadvantaged communities are stuck in a scarcity and survival mentality and never experience what it means to create their own futures,” says Lisa. “They are not given a framework of thinking that helps them see the world for the possibilities it holds- only the risks of failure.”

FutureProof gives kids the opportunity to craft their own futures by applying the entrepreneurial skills gained in their real-life situations. “By instilling an entrepreneurial mindset, we look to cultivate a generation of hungry entrepreneurs who are able to identify and build-on opportunities. Our courses teach problem solving at the highest level to the youngest kids, and we have seen some amazing success stories come out of this in kids as young as eight years old”.

Sibongile is 9 years old and lives in Johannesburg with his mom. He wanted to solve the problem of getting sunburnt at break-time whilst out playing on the school field with his friends. He decided to empty his sunblock, that often left a mess in his school bag, into an old pump bottle from home, use the cutlery rack from the sink to hold the bottle and nailed it next to the door of the classroom. He sold the bottle to his teacher for R150.00 and now supplies his entire school and 2 other schools in the area with their sunblock. There are many more success stories and social proof of the impact FutureProof is making on the kids and teens of South Africa both from the participants on the program and parents, who’ve seen the change in their kids, alike.