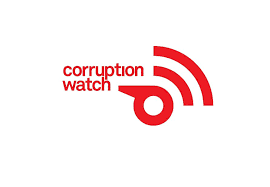 Corruption Watch (CW) today released its latest annual corruption report. Titled The Writing is on the Wall, it shows how throughout 2019, the public continued to expose corrupt individuals intent on abusing their power and looting public resources in key sectors. The 3 694 whistle-blower reports in 2019 highlighted how individuals were robbed of access to their fundamental right to safety and security and basic services through corruption in policing, schools, healthcare, and the mining sector, to name a few.

David Lewis, executive director of Corruption Watch, commented: ‘We release this report in the midst of a global and national crisis of unprecedented proportions. This crisis has thrown into sharp relief the deadly consequences of corruption, at this stage most particularly the corruption that has resulted in dysfunctional local government and that has devastated the public health and water sectors. Make no mistake: lives that would have otherwise been saved will now be lost as a direct consequence of corruption.”

We should not expect corruption to abate in the teeth of this public health crisis, added Lewis. “On the contrary, the crisis may exacerbate the abuse of power and resources that accompany the necessary relaxation of procurement regulations and the extension of emergency powers to law enforcement. As attention turns elsewhere unscrupulous elements in the private sector will engage in price gouging and procurement corruption.”

The public need to remain vigilant and committed to exposing corruption, Lewis cautioned, “even as life is dominated by the necessity to limit the spread of the virus. We remain ready to play our role.’

The facts and figures

In 2019, the organisation received an average of 10 reports a day, demonstrating the public’s commitment to continue to expose those corrupt individuals who have sought to further their own private interests at the expense of ordinary people. In terms of the hotspots of corruption, the highest number of reports were received in the policing sector (12%), followed by schools at 10%, mining, traffic and licensing at 9%, and healthcare at 4%. These allegations of corruption have primarily featured bribery (17%), procurement corruption (16%) and mismanagement of funds (15%), all of which have impacted the delivery of services and denied people of their basic socio-economic rights.

The data shows that 29% of corruption reports involve national government, a 2% increase from 2018, while local government counts for 26%, and provincial government 20%.  A fifth of the reports, 19%, point a finger at the private sector. As in previous years, most reports were received from Gauteng (47%), followed by KwaZulu-Natal at 10%, and Limpopo at 9%, the latter featuring in the top three provinces for the second year in a row. It is not surprising that Gauteng remains in the lead as the highest populated province, the most economically active and where the seat of national government is located.

For those who have contributed to the breakdown of the South African state, the crumbling of state-owned enterprises, and the rot at key institutions, the writing is on the wall. The public will not let up in continuing to expose those who obstruct the rebuilding of the country, who continue to hold on to their ill-gotten gains, or who are determined to fight back and re-capture the South African state.

Corruption Watch, together with the people with whom it engages, will be unrelenting in the quest to build a society free from corruption and abuse.

The post Corruption – Are we making progress? appeared first on The Home Of Great South African News.