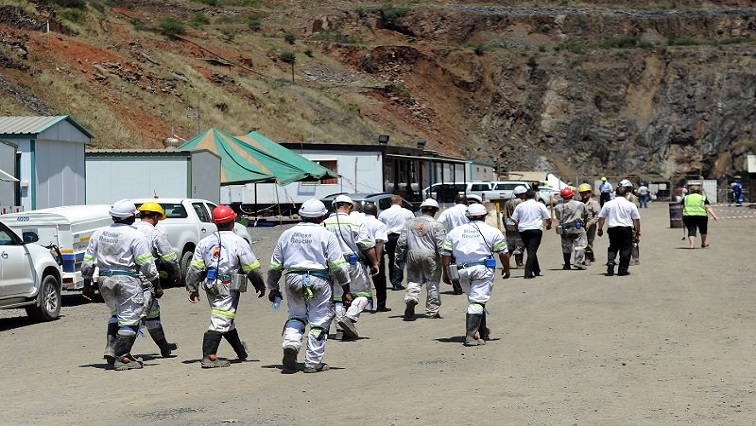 Mine workers at Tau-Lekwa and Kopanang gold mines at Orkney near Klerksdorp, in the North West, are demanding that government revoke the mining licences of the Village Main Reef (VMR) mining company.

The workers claim to have been transferred from Tau-Lekwa and Kopanang to VMR, without being consulted, allegedly with contracts which put them at a disadvantage in terms of employment benefits.

They braved the chilly and rainy weather to march for about 14-kilometres to Klerksdorp, to deliver their memorandum of demands and grievances to the Department of Mineral Resources and Energy as well as that of  Employment and Labour. The miners’ key complaint is that they have been transferred to another company, VMR, without consultation.

“Since they bought the mining licence from Anglo Gold we have witnessed numerous mismanagement from their side. There are number of fatalities that happened in Tau Lekwa to be specific, there are quite a number of mismanagement that they are doing including the gold thieving done by them internally. We are then saying, this is a sign to us that VMR as an employer is not interested in South African people, it is interested in making money so they must leave the licence with us,” says Junior Kgwedi, who is the mineworkers’ representative.

The workers, who were joined by some local community members, say their living conditions have been adversely affected by the unilateral transfers.

“The last time we got a salary was in March; they only gave us a relief fund from government on the 8th of May.”

“If  VMR does not listen government must take the licence of VMR and give it to someone who can take care of the employees,” say some mineworkers.

An employee of the City of Matlosana, Abbeya Nkapela, received the workers’ memorandum, on behalf of the two departments.

“The memorandum that I have received on behalf of the relevant authorities will be submitted first thing tomorrow morning,” says Nkapele.