The Trump administration is weighing tax relief for airline, cruise and travel industries to help such companies cope with a growing coronavirus outbreak that has dried up bookings, a source familiar with the plan said on Friday.

The move, which could include tax deferrals, is one of several targeted steps that the administration is considering to try to limit the economic damage from the epidemic, which could stifle consumer spending and keep many workers at home.

White House Economic adviser Larry Kudlow said it was too early to determine the magnitude of the slowdown and the nation’s overall economy remained fundamentally strong and was not headed for a recession.

US officials were concerned about people who may have to stay home because of the outbreak and lose wages, as well as about small businesses and airlines, among others, Kudlow told reporters at the White House.

Getting your workplace ready for #COVID19 pic.twitter.com/9sjkGnnUmS

FACT: The new #coronavirus cannot be transmitted through goods manufactured in China or any countries reporting #COVID19 cases.
If you think a surface may be contaminated, use a disinfectant to clean it.

“There are a lot of things we can do for cash-flow purposes, possibly deferred tax purposes, and we can set up mechanisms to do that,” Kudlow said, adding that they would be “micro-forms of assistance.”

Kudlow did not name the specific industries that could get tax deferments and a Treasury spokesman did not immediately respond to a request for comment. The Washington Post first reported here that the administration is considering the idea.

Kudlow said the administration may have to go to Congress to seek additional funding, but aid would be “targeted micro-forms of assistance.”

“We are at the moment are not going to do these gigantic packages where we put in helicopter money for everyone,” he added.

The Federal Reserve this week announced an emergency half-percentage point rate cut to try to blunt the coronavirus’ impact.

US and global markets have slid for the past two weeks as the spread of coronavirus outside of China has raised investors’ fear of the outbreak’s impact as the number of cases neared 100,000 worldwide. In the United States, the death toll from the respiratory illness rose to 15.

The US market slide alone had wiped out nearly $4-trillion of value through Thursday.

(GRAPHIC: US stocks have fallen hard) 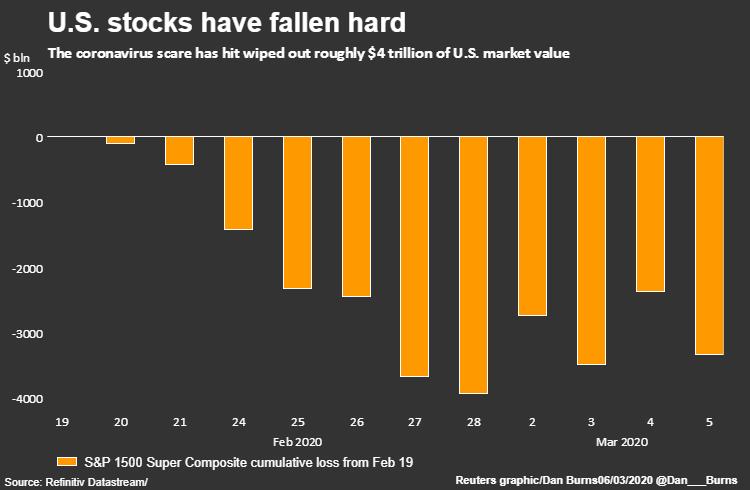 US President Donald Trump could act via executive order, or he could also turn again to Congress, which this week approved an $8.3-billion bill aimed at efforts to boost the US response to the outbreak, including money for drug and vaccine development as well as the public health efforts.

Trump signed the measure into law earlier on Friday.

“We’re looking at different options,” Trump said on Friday when asked whether he was considering deferring taxes for companies as he toured tornado damage in Tennessee.

Earlier, at the White House, Trump called for another Fed rate cut to eliminate a “competitive disadvantage” for the United States compared to Europe and China.

Kudlow said the administration was not inclined to enact a temporary payroll tax cut, or lowering tariffs on imports, which some experts have said could ease global supply chain problems.

Coronavirus cases around the world: